Magnetic interference: This is where the source of the magnetic field comes from a dissimilar circuit component e.g. magnets, transformers, motors, contactors and other dissimilar relays. Sources of magnetic interference should be positioned as far as possible away from the reed relay(s). It may be necessary to incorporate magnetic shielding or enclosures around such components where space constraints exist.

Magnetic interaction: This can occur when reed relays of the same or similar type are positioned near one another and the magnetic fields present around each relay interact with one another.

Figure 1. Illustrates the magnetic field lines present around two identical reed relays mounted adjacently on a PCB when both relays are energised; note that the relays are mounted in the same direction with the same coil polarity and coil current flow. Under such conditions the magnetic fields present will have an adverse effect upon the relays operate and release characteristics.

When relay 1 is energised with a current flowing opposite to that in relay 2, an attempt to energise relay 2 results in lower operate and release voltages.  Assuming both relays are identical, the same affect can be achieved by rotating relay 1 180° and maintaining the same coil pin identities for both relays.

The interaction of the magnetic fields can cause relays to fail to operate and or fail to release. It is important to note that any proposed circuit layout shall be tested for interaction effects across the expected operating temperature range as failures may only be observed at environmental temperature extremes.

Magnetically biased relays: Form B and Latching contact (Bi-Stable) reed relays use charged permanent magnets to bias the reed switch contacts in or towards a closed contact condition. Therefore, these reed relays will always have a magnetic field present around them whether they are energised or deenergised. Irrespective of this fact the same PCB layout techniques may be used to mitigate against reed relay interaction.

Ways to reduce magnetic interaction
It should be noted that in most cases interaction cannot be eliminated completely, however it is usually possible to limit interaction effects to an acceptable level for any given application when using identical relays.

The reed relay user should arrive at a circuit layout:

Maximise space between adjacent relays:
Each doubling of the relay on-centre distance (OCD) reduces the interaction effects by approximately a factor of four. The greater the distance between relays the better.
Figure 2. Illustrates the terms on centre distance and gap. 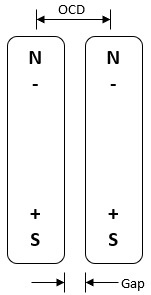 Alternate relay polarity:
For two or more relays of the same type, with consistently wound coils, arranged in a single row, alternating the relay polarities by rotating the relays through 180° will have the effect of minimising interaction. See figure 3. 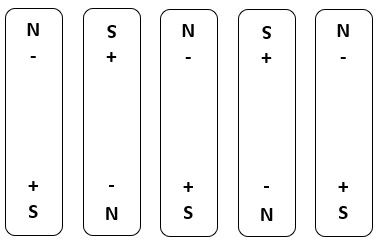 Alternate pairs:
When a user needs to mount multiple identical relays in a matrix relay polarity may be alternated in pairs to provide enhanced packing density.
See figure 4. Note this method is employed to minimise interaction on the centre most relay of the matrix, it does not eliminate interaction and interaction will vary depending upon the relay activation sequence. 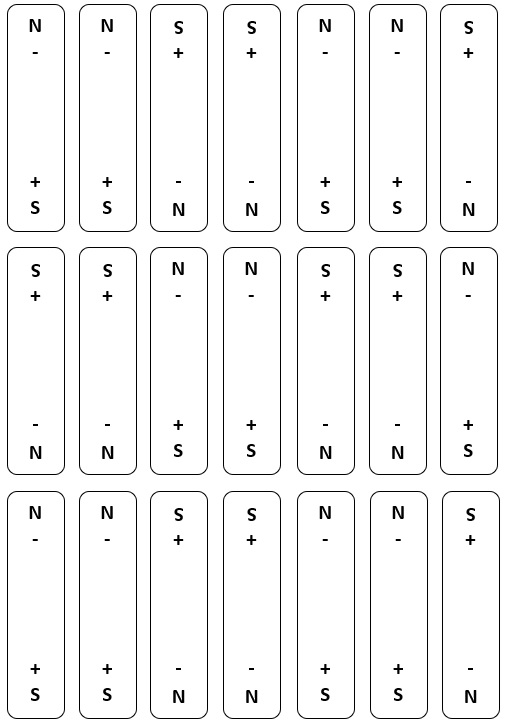 Relay activation sequence
Avoid activating adjacent relays at the same time. If the surrounding relays around an active relay are always off then this has a similar effect as increasing the OCD between relays. This method can be used with any chosen layout.

External magnetic shielding
Magnetic shields made from Mu-metal or other high magnetic permeability materials can help shield relays from one another as well as sources of magnetic interference. However, shields must be carefully designed to prevent the creation of unintentional magnetic shunts. A shunt will cause the magnetic field to bypass the relay completely and can cause the relay to fail to operate and or release. It is also important to observe creepage and clearance distances when implementing any external shielding.